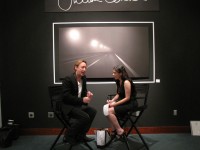 Rachel was first published at the age of six. But her real professional career didn’t start until much later. Always an avid writer, Rachel has felt that she has a natural ability for the written word. In 1998, while working in sales at Talent Magazine in Los Angeles, she was offered the chance to become a theater critic. It was those few tear sheets that led her to the career she holds today.

When the magazine closed, she held onto to her work and used it later when she moved to Florida in 2000. She had been pursuing acting in Los Angeles and wasn’t sure where to turn for acting work in a new state so she looked elsewhere for a career. Seeing the film “Almost Famous” inspired her to be a writer. With those tear sheets in tow, she worked steadily for six months trying to convince someone, anyone to pay her to write.

It began with one publication — Our Town and shortly after Neighborhood News. Then, a bigger publication, The Forum, associated with The Tribune, began using her work. Now she had three publications that she was writing for on a freelance basis. But more followed. It wasn’t long before the publications reached double digits and then doubled. Some publications she has written for include Sun-Sentinel, Palm Beach Illustrated, Cravings, Boca Raton Observer, New Times (as theater critic and entertainment writer), DUO Magazine (as film columnist) and more.

In 2001, she became involved with CitySmart Magazine as a writer. In 2004, she came on as Calendar Editor and in 2006 she went from overall Contributing Editor to Editor, where she remained until the magazine closed in 2008. She continued freelancing but found a new home base at Observer Newspaper, working in-house as an assistant editor and also the schools reporter, where she currently works today. She became the editor in Sept. 2015. In addition, she was able to combine her work in front of the camera with her reporting by becoming the host for ObserverTV. She also became lead writer (“Editor”) for In the Biz Magazine, a publication about the hospitality industry.

In 2014, she became the editor for The Observer and, when the print publication closed at the end of 2019, she continued working on their online website while working as an editorial coordinator at Coastal Communications, editing for three national magazines focused on meeting planners and travel.

In addition, for the last approximately four years, she has been working on her own magazine, Independent Streak Magazine (www.independentstreakmagazine.com), which focuses on the film industry.

One thought on “Writing”