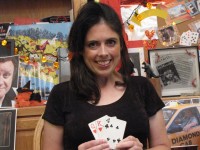 In an attempt to raise excitement about the upcoming filming of the highly anticipated Sci-Fi webseries “Absolution,” Rachel Galvin created a series of video blogs Oct. 16, which will be aired weekly starting soon on the Absolution website and other venues. Galvin plays Mary Jane Carson, the president of the Scott Dru Fan Club and creator of video blogs done in his honor, as well as his Facebook page, entitled Scott Dru Fans Unite (The site will be launched soon). Carson is not just any fan. This No. 1 fan plans to be Dru’s number one … at all costs.