“Prowler: The Terror of Santa Carla” is set to go to a Film Fest in Cannes, France, according to director Ram Hernandez. Rachel Galvin did a voiceover as a reporter in the film and is pleased to hear it is headed to the fest. Hernandez said as many as 5000 people could be in attendance at fest. 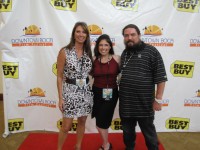 On April 14 at the Mizner Park Cultural Arts Center, a medium-sized crowd assembled to watch the four contestants for the Script to Reel contest. Director John Hamblin was one of the directors brave enough to take on the challenge. The stipulation in creating the quickly-put-together project was that it has to include a certain line of dialogue, feature product placement from the Downtown Boca Raton Film Festival sponsors, it had to feature the mascot Leo–the dog, and a few others fun last-minute things. He pulled it off.

Rachel Galvin was one of the leads. “I played the quirky wife,” she said. “I used a lot of my own personality in the character. I had a blast working with the creative cast and crew. John was great! He allowed us to really make the parts our own and embellish (Improv) as we saw fit. I was able to bring and utilize my own props to really bring the character to life.”

Rachel Galvin interviewed about her book, \”Basics of the Biz\”

Rachel joined the gang at First Edge Studios in Wellington and filmed a skit for their new TV pilot, a SNL-type skit comedy show, “Short Takes on Life. Playing an Undercover Cop who gets the shaft in the skit “What Makes a Cop Pop,” her character’s development took her to new heights.

“This is the most over-the-top I have ever played,” she said, adding, “It was a lot of fun really letting loose with this character and the other actors were great to work with.”